In chapter 1 of this Design Diary, I described the initial idea for my work-in-progress game design, Mansion Builder. It’s an auction game in which players are property developers, bidding in auctions to acquire ridiculous improvements for their mansions in order to satisfy the desire of oddball buyers.

One of the first issues I had to deal with: How do I want to actually conduct the auction? It’s a simultaneous auction where everybody decides how much they want to bid and then everyone reveals their bids at the same time. How did I want this to work at the table?

Well, as a designer I had a few different approaches for running simultaneous bid auctions.

My first thought (since it was at hand) was to go with cards. Specifically, I used regular playing cards and gave each player a set of Ace (representing 1) through 10 of a suit. When it was time to bid, everyone would choose one of their cards, put it face down in front of them, and then everyone would reveal simultaneously.

This actually did work, but it had some drawbacks.

First, it limited the players to bidding up to 10. In theory, if a player has 25 money and they want to bid all of it, they should be allowed to.

Second, it created an awful lot of components. A full set of bidding cards for each player is unwieldy.

Third, if the game were played a lot, these  cards would wear unevenly. The lower numbers (5 or less) would be used the most, and could end up being marked.

My next idea was to give each player a card with a dry-erase coating on it, along with a dry-erase marker (think Telestrations, but smaller). Everyone secretly writes their bids, then reveals simultaneously. 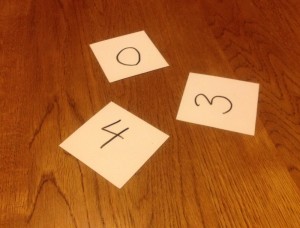 This worked okay in practice, but I still wasn’t completely happy with it.

First, depending on how sneaky players were being, it could be possible to figure out what others were writing based on the movement of their pen.

Second, it was a little bit messy with all of the dust from erasing the bids.

My current approach is making me happy so far. Money in the game is represented by small tokens of some sort. I’m currently using small plastic “scatter” that looks like little crystals. The clear crystals are worth 1 money each, and the amber crystals are worth 5.

Players put whatever quantity of money they want to bid in a closed fist, then all players simultaneously open their hands to reveal their bids.

The biggest advantage of this approach is that it’s a lot of fun. There’s a nice moment of tension when all of the players have a closed fist in the middle of the table right before the bids are revealed.

Another advantage is that it makes bookkeeping much easier. I always had tokens for money, and with the other methods the players had to reveal their bids, then reach into their supplies to fish out the right amount of money and put it back in the bank. Now they can just drop the crystals that are in their hands right into the bank pile.

So, that’s one issue solved: Closed fist auctions are going to work for Mansion Builder. Next time, I’ll talk about the challenges of designing useful playtest cards. Icons ahoy!

This week I was interviewed by Zack Strebeck for his legal blog. He was interested in talking about the legal aspects of running a game company, including:

Go have a look!

Part 1 of the interview

Part 2 of the interview

When you’re just starting out in game design, you probably don’t have a lot of money to spare on game-related stuff. You’re going to be taking money out of your own pocket to cover the cost of paper and printer ink and card sleeves and meeples and such, just to get your game prototypes to the stage where you can test them out.

I sympathize. Really, I do.

Later on, perhaps you’ll get to the point that you have a great, playtested game that you’re ready to put on Kickstarter so that you can afford a big print run (or a small print run, as in the case of Otters). If you’re going to run a successful Kickstarter campaign, it’s going to have to look good. You’ll need some illustrations to show what your final game is going to look like. You’ll also need some great graphic design.

You want backers to see you as a professional. And that’s going to cost money.

And here’s where you have to face a hard truth:

You’ll need to invest some of your own personal money into your game before you’re ready to take it to Kickstarter.

You might be tempted to ask talented people to work for free. Please don’t.

Now, if it’s a close friend or family member who just wants to help you, that’s fine. But please don’t work your network to find someone you’re vaguely connected to who has artistic ability and then ask them to donate their time and energy for nothing.

This is the one that inspired this post. A game designer was asking for referrals to professional artists who would work now and get paid if the designer’s Kickstarter campaign is successful.

That’s a big if. What happens if the campaign does not succeed? The artist gets nothing.

Now, if you have an artist who wants an equity stake in your project, that’s open to negotiation. Maybe they are interested in getting, say, 10% of the Kickstarter gross or an actual share in your game publication business or something. That way they share on the potential upside, too.

But if you have an artist who would charge, say, $500 for the work you want done, it’s not cool to ask them to do the work now and pay them if (and only if) your Kickstarter succeeds. You’re the one taking the business risk here – don’t ask the artist to take that risk for no upside.

I hope that this one doesn’t need to be reiterated, but we live in the era of the internet, and it’s easy to use creative works that you don’t have the rights to. Do a Google image search, and you’ll find tons of awesome artwork that’s ready for downloading and dropping into your game.

If you’re putting together a first draft prototype that will only ever be seen by your close personal friends and family, then this is okay. But if you plan to show your prototype online, let alone print it for money, you can only use art that you own the rights to.

This means that you either pay to commission or license art from a professional, or you find art that you’re legitimately allowed to use without paying for it (such as public domain or Creative Commons commercial-use art). Don’t just use an awesome image because it’s there if it’s not yours to use.

Why should I care?

Well, I think that all of us in the (relatively small) game design community have a duty to make it a better place. I want a community where artists feel welcomed and respected, not one where they feel like they’re going to get screwed over at any moment. I want to foster a feeling of respect all around, and standing quietly while a fellow designer engages in business practices that I find unethical doesn’t build the community that I want to see.

We’re all in this together – designers, artists, gamers and everyone else. Let’s make the gaming community a better place.

P.S. You may have noticed that the illustrations accompanying this post are icons. These are from the excellent Noun Project, which has tons and tons of icons that are available either in the public domain or in a Creative Commons commercial-use license (hence the attributions in the captions). And if you want to use the CC-licensed icons without attribution, you can buy the rights for $1.99 per icon (or $1 per icon if you buy 10 at a time or 50 at a time or whatever). Great site – go check it out!