I have a guest post over on the Stonemaier Games “Kickstarter Lessons” blog today, all about the various ways of making prototype cards for board and card games.

“For me, card prototyping is now a three- (or four-) step process:

Step 0: If the game can easily be tested with normal playing cards, start there to work out very rough mechanics. Not applicable to all designs.

Step 1: Excel spreadsheet, printed, cut up, inserted into sleeves with Magic cards. This is where the bulk of my design work happens.

Step 2: Print directly on cards when I want nice-looking prototypes to send to blind playtesters demonstrate at conventions or pitch to publishers.

Step 3: Go with DriveThruCards to print final review copies or actual print runs of my games.”

And of course I would be remiss if I didn’t say THANK YOU to all of you who jumped on the Kickstarter campaign for my card game, Otters, on day 1… leaving the project funded just nine and a half hours after launch! Thank you all so much.

I’m so excited to announce that the first ever Kickstarter project run by Clay Crucible Games is now live on Kickstarter!

Otters is a kid-friendly card game full of adorable pictures of otters. It plays in about 10 minutes. The basic deck lets you play with two players (or two teams of two players each), or you can get a double deck to let you play with three or four players.

A $12 pledge gets you a deck shipped in the US, and you can up your pledge by $9 if you want a second deck.

You can even add in custom cloth bags to carry your game in if you want.

Editor’s note: This is my first blog post to originate on the Clay Crucible Games site directly instead of on my old site, Online Dungeon Master. I intend to ultimately bring my board game related posts from Online Dungeon Master over here, but I’m starting with this one.

Those of you who may have been eagerly following my blog posts about my National Game Design Month (NaGaDeMon) 2013 project, Otters, might be wondering what the heck ever happened with that game. Wasn’t I just about done with it in late November?

Well, yes, I was! And I was actually planning to put it up on DriveThruCards as a print-on-demand item. But then something came up:

After asking for opinions on some game- and Kickstarter-related Facebook groups, I decided that I might as well run a Kickstarter project for Otters rather than just tossing it on DriveThru and calling it a day. 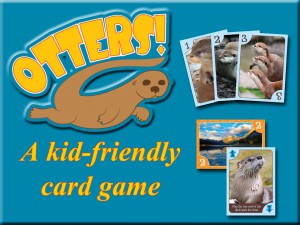 There are a few reasons I decided to go this direction.

First, there’s the exposure. Lots of gamers are looking for games on Kickstarter, and they may well discover Otters if it’s there when they might not discover it if it were only on DriveThru. Now, that by itself isn’t much of a reason to run a Kickstarter project for a game, but it is a reason to consider.

Second, there’s packaging. While I love the quality of the cards from DriveThru, the only box they offer is a clear plastic box to drop your cards in. I’ve ordered some of these boxes, and I just don’t love them. If I order the cards shipped to me from DriveThru, I can put them in a box that I like a bit better, one with an actual Otters label on it.

Finally, there’s the potential for enhancement. Otters is ready to go right now, even before the Kickstarter launches. I ordered a small print run from DriveThru so that I would have copies to send to reviewers, and I even have some extras left over from that print run that I’ll offer to Kickstarter backers who want a game ASAP.

But I don’t have to leave Otters in its current state.

Now, I’m keeping my expectations for the Otters Kickstarter campaign firmly in check. I’m only planning on trying to raise $500. But if it gets to the several thousand dollars level, well, I can improve the quality of the product. And that’s worth going to Kickstarter for.

Finally, the other reason I’m interested in Kickstarting Otters is that I want to get the experience of running a Kickstarter campaign. While I expect to mainly be a designer who designs game for others to publish, I want to know what it’s like to be a publisher, specifically one who uses Kickstarter. I did publish the first edition of Chaos & Alchemy myself, but I paid for that out of pocket. Could Clay Crucible Games be a full-on publisher one day? Probably not, but Otters is the perfect project for me to explore that possibility.

So there you have it: Otters will be coming soon to Kickstarter! I’m targeting a late January / early February launch, so keep your eyes peeled!

And if you want a sneak preview of what the Kickstarter page is going to look like, check it out here: http://www.kickstarter.com/projects/1125132758/1664206759?token=b3fc11c9. As of this writing (January 15) the page isn’t 100% complete; I still need to add the main video, the learn-to-play video and some photos of the review copies (plus more reviews as they come in). But everything else is there. Let me know what you think as far as improvements go, either here on the blog, over on the Kickstarter preview page itself, or via email at ClayCrucible@gmail.com.