At the beginning of 2016, I mentioned to my wife Barbara that some people on the BoardGameGeek forums were talking about the “365 Play Challenge” – setting a goal to log 365 plays of various games during the course of the year. Barbara liked the idea, and so did I, so we set it as a goal for ourselves.

Every time we played a board game during the year, I logged the play in my BoardGameGeek account (user name ChaosAndAlchemy in case you’re wondering), using the excellent BG Stats app on my iPhone (it’s only a couple of bucks, and I personally love it). I also tweeted each play using the #365games hashtag. This lets me look back now that the year is over and reflect on what an awesome gaming here it has been!

The main goal was to log 365 plays, averaging one per day (and yes, 2016 was a leap year, so we had an extra day to get there). Mission accomplished!

On December 17, during a run through several months of Pandemic Legacy: Season 1, we hit our 365th play. By the time the year ended on December 31, we had logged 385 plays in total.

I’ll note here that I only logged plays of games that took place with the physical game, not online plays or plays against an app. We both played lots of app games as well (for me, mostly Star Realms, Pandemic, Backgammon and Chess), but only the real-world games counted for our challenge.

Now, while we mostly play games with the two of us, sometimes with friends added in, not every play included both me and Barbara. There were two games of Rhino Hero that Barbara played with a friend of ours at BoardGameGeek Con in Dallas in November while I set up and learned the rules to a different game (Shear Panic), so I only played 383 games myself. As for the other direction, I logged many plays of games at lunch breaks at work, plus a few at BGG Con while Barbara was doing other things, so Barbara’s total was 323 plays. Close enough!

Another common challenge that people set for themselves on BGG is the 10×10 Challenge. In the Normal version (which we ended up doing), you try to have 10 different games that you’ve played at least 10 times each by the end of the year. In the Hardcore version, you pick 10 games at the beginning of the year (plus one alternate) and aim to play each of those specific games at least 10 times during the year.

I like that our 10×10 list has a mixture of some quicker games with a bunch of meatier titles as well. As you can see, we played the full 15 game campaign of Risk Legacy and about half of a Seafall campaign. Not shown here are our 7 games of Pandemic Legacy; it was a very Legacy year!

When we were at BGG Con, we played some games with one woman who said she was working on a 25×5 challenge. Similar to the 10×10 but rewarding more variety, the goal is to have at least 25 different games that you’ve logged 5 or more plays of.

At the time, we realized that we had already hit something like 22×5, so it wasn’t too much effort to get to the full 25. In the end, we ended up with 29 different games with at least 5 plays each.

This is one I noticed when looking at our stats as the year neared its end. We had logged plays of over 90 different games during the year; wouldn’t it be cool to get to 100? Yes, yes it would.

This is the one that I was scrambling to get at the end of the year. We hit 97 pretty naturally by mid December, so I looked through my collection to see which games just somehow hadn’t hit the table in 2016 yet.

Barbara and I played a quick game of Otters (yay!) to get us to 98. As I looked toward the last couple of days of the year, I knew we would be getting together with friends on December 30, and that turned into TIME Stories night (we played the Marcy case), which got us to 99. We also pulled out Euphoria, which somehow hadn’t made it to the table in over two years, bringing us to 100. 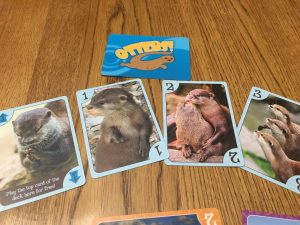 Game 370 of the year: Otters! Man these guys are cute. Whoever designed this game sure is groovy. #365games pic.twitter.com/aP9cPNfwBR

Of those 100, 45 were new-to-me games. BGG Con certainly helped in this regard, since we got to play a bunch of brand-new games but we also took advantage of the game library to try some older games that we had never played. This was how we discovered Trajan, one of our gems of the year.

Part of the fun of tracking board game plays is the ability to look back at the end of the year and remember the events surrounding those plays. In addition to all of the great times with just Barbara and me, playing a game at home, I also loved recalling these:

It was a really, really good year of gaming, and I definitely have more concrete memories of so many good times with friends and family thanks to keeping track of my games played.

While I don’t think we’re going to get nearly as many plays in for 2017 (we’re trying the hardcore 10×10 but not the 365), I know we will continue to build memories and relationships around the gaming table, and I can’t wait.